JSC CENTRAKO – an authorized representative of DAF trucks in Vilnius, Kaunas and Riga. Everything necessary for trucks and their trailers.

Our main activities are the sales of new and used trucks, warranty and post-warranty service, and the sales of original spare parts.

Mission – to ensure the complex service of the customers of the highest quality and biggest added value, by constantly learning, implying the newest technologies and motivating the employees.

We will implement our mission in the following way:

Expedience
We focus on the customer and strive to achieve maximum long-term customer satisfaction by developing our competencies and working together. We think that expedience results in successful teamwork which produces useful and effective results for us and our environment.

Awareness
We are loyal and flexible, and respect the privacy and decisions of others. We delegate and inspire members of our team and provide opportunities for improvement.

Responsibility
For us, being responsible means acting professionally and consistently. We are able to perform our work qualitatively and take responsibility for our decisions and results.

Integrity
We rely on wisdom and put honest effort in achieving the best possible result.

Creativity
We strive to become creators and innovators, and want others to have confidence in us.

JSC CENTRAKO started its activity of the 20th of December 1995 in Lithuania.
At the end of 1998 JSC CENTRAKO moved into new premises at Taikos ave. 135, Kaunas.

In May 2004 the organisation signed sales and service representation contracts with DAF Trucks N.V., which complied with the requirements of the European Union.

At the begging of 2005 CENTRAKO started working additionally as specialised trailer service, the purpose of which – to repair the trailers and semi-trailers of all the manufacturers as well to supply spare parts. The guarantee and running repair works of Koegel, Schwarcmuller, Lamberet, Pacton and other manufacturer trailers. Service representation contracts with BPW, Wabco and Haldex were signed.

On the 30th of October 2008 one of the most modern in Europe DAF service managed by UJSC CENTRAKO was opened at Minsko st. 4, Vilnius.

Currently the company as an official representative of DAF Trucks N.V. implements its activity in Lithuania and Latvia.

SIA CENTRAKO started its activity on the 3th of June 2003. The company is located in Riga, Latvia. 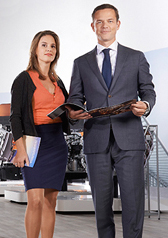